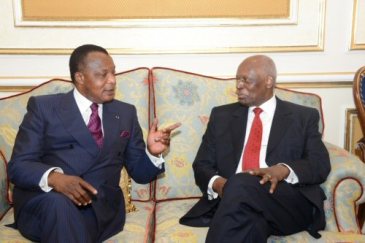 On 16 April 2016, the Angolan President, José Eduardo dos Santos, travelled to the Republic of the Congo – also called Congo-Brazzaville – to attend the presidential inauguration of Denis Sassou-Nguesso, who was re-elected for a third-term on 20 March 2016. Angola’s head-of-state was accompanied by the Angolan Minister of Foreign Affairs, Georges Chikoti.

José Eduardo dos Santos’ visit to the neighboring country must be highlighted, given that it is increasingly rare for the Angolan leader to travel abroad. Why Congo-Brazzaville then?

First, by travelling to the neighboring country with the head of the Angolan diplomacy, José Eduardo dos Santos is shielding an African leader who, like himself, has been in office for more than two-terms. In other words, ‘blessing’ Sassou-Nguesso’s continuation in office reinforces, to a certain extent, José Eduardo dos Santos’ own hold on power. Additionally, by doing so, he is averting a potentially dangerous precedence at the regional level. In fact, it is highly likely that the Congolese leader’s removal from office would motivate African and international movements that condemn the perpetuation in power of political leaders.

Secondly, it is worth taking into consideration the instability experienced in Congo-Brazzaville during the recent electoral period – which is still very much present. José Eduardo dos Santos’ explicit expression of support for Sassou-Nguesso’s re-election shows the political opposition and movements against the statu quo that Luanda is seriously committed to ensure that the leader of Congo-Brazzaville remains at the helm of the country. As such, it would be a risk for any Congolese government to go against the plans of an Angolan leadership that has, in the past, proved willing to interfere—politically and military—in the internal affairs of neighbouring countries if the necessity arises.

In addition, just as Laurent Kabila—and even his son Joseph—in the Democratic Republic of Congo, Sassou-Nguesso owed his rise to power to the Angolan president. In view of all this, it is clear how powerful José Eduardo dos Santos’ message is by deciding to visit Brazzaville on this occasion. To put it in another way, any scenario implying the end of his rule is highly likely to be reciprocated with a pragmatic response by Luanda aimed at influencing the country’s political order in its favour. The opposition is certainly aware of that risk.

Furthermore, since coming to power, Sassou-Nguesso has, to a large extent, maintained good relations and close collaboration with Angolan authorities, particularly in terms of security and stability. Therefore, José Eduardo dos Santos understands the risks associated with the establishment of a new government in Brazzaville whose authorities may choose an alternative path, i.e. opt for less cooperation or even confrontation with Luanda.

Angola’s recent history, particularly during the civil-war, shows that national stability and security are, to a certain degree, contingent on guaranteeing stability in Congo-Brazzaville and ensuring the incumbency of a government close to Luanda. This is particularly relevant when considering that Congo-Brazzaville shares borders with Angola, more precisely with an Angolan enclave, the oil-rich province of Cabinda.

The regime prior to Sassou-Nguessou backed FLEC separatists in Cabinda, by allowing them to use the territory as a logistical and operational base toward maintaining and sustaining the insurgency in the territory. However, the establishment of Angola-friendly governments in the two Congo’s and the end of Angola’s civil-war—among other factors—represented a serious setback for Cabinda’s rebels.

Yet, it appears that the separatists have not disappeared completely. In February 2016 the insurgency campaign acquired new contours, with FLEC’s armed branch declaring the resumption of the armed struggle. Since then, the group has reportedly been attacking Angolan troops in the territory, something which has been vehemently denied by national armed forces. Regardless of the veracity of those attacks, FLEC’s February announcement—even if mere rhetoric—places political developments in Congo-Brazzaville at the center of Angola’s concerns. Thereby, it is understandable that the Angolan authorities are concerned with the possibility of a new government in Brazzaville that may change its political stance regarding Cabinda, i.e. cooperation with Luanda.

Moreover, there is also the issue related to maritime border demarcation between both countries—including the Joint Development Zone—, which, despite the mutual will to solve existing differences, may deteriorate in a post-Sassou-Nguesso scenario full of uncertainty. In this context, Angola’s access to vital oilfields in that maritime region would potentially be at risk.

In short, Congo-Brazzaville represents more than a priority for Angola’s diplomacy. A line of foreign policy focused on its neighbouring country is, above all, a necessity, since Congo-Brazzaville plays a major part in Angola’s security and stability.

José Eduardo dos Santos’s recent visit not only shows that he keeps a watchful eye on what is going on in Congo-Brazzaville, but also that Angola’s neighbourhood continues to be in the first line of priorities of his foreign policy.

This is, indeed, a strategic necessity.